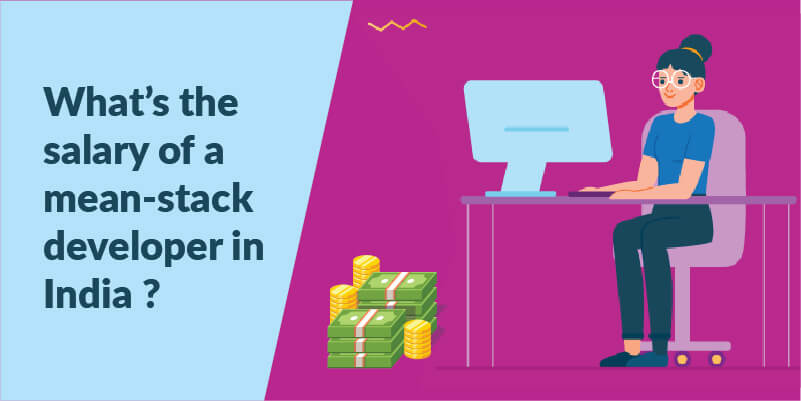 Do you know what’s the salary of a mean stack developer in India? Read on to find out how the salary can vary based on experience, job location, company, qualification, and technology that you work with as a developer

MEAN is a full-stack development toolkit used to build dynamic and robust web applications. Mean stack refers to a collection of JAVAScripts, one of the most widely used programming languages, extending from the client to the server end. Therefore, a MEAN developer must be well-versed with using JAVA. A MEAN architecture typically has four important elements:

Why mean stack development is so popular?

We also explain the various factors – such as job location, company, skills, and experience – that govern the salary package.  Below is a screengrab of the mean stack developer jobs available in various cities in India and the skillsets/qualifications that most companies look for while hiring developers [Naukri.com] 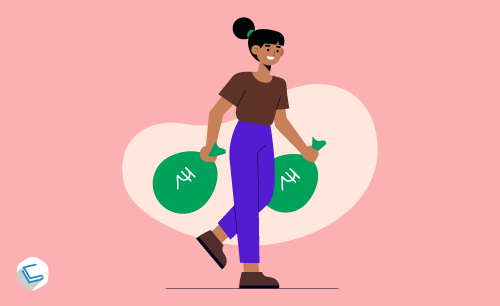 What is the salary of a mean stack developer in India?

Below we have displayed the average salary, along with bonus and profit sharing, of a mean stack developer in India –

In this section, we explain the salary package of mean stack developers based on experience levels, skillsets, companies, and technologies used to work with.

According to Indeed.com, the average salary of a mean stack developer in India is around INR 4–6 LPA, and it can increase to approximately to 9LPA for a team lead position.  In cities like Gurgaon, Bangalore, New Delhi, and Hyderabad, mean stack developers can earn around 70%, 21%, 17%, and 15%, respectively, which is higher than the national average payscale. But in cities like Chennai, Pune, and Ahmedabad, the pay is little lesser than the national estimate with 4%, 2%, and 32%, respectively.

Now that you know what’s the salary of a mean stack developer in India based on experience and job location, we move on to give you an insight into the average salary of a developer on the basis of wide range of skillsets and knowledge of technology.

The other equally relevant languages in mean stack are Angular.js, React.js, and Node.js – developers with these skillsets can earn around INR 4.5 LPA, 4.5 LPA, and 5 LPA, respectively. Another important technology stack similar to MEAN is MERN stack. MERN stack developers in India can earn roughly INR 4–5 LPA [Glassdoor].

Technology has advanced at a rapid pace over the past few decades. Individuals across the world rely on data for various needs – for maintaining business transactions, measuring business performance, creating marketing strategies, and achieving fullproof results. With more and more industries switching over to using machine learning and data science, there is an increasing demand for skilled professionals. Professionals like mean stack/full-stack developers have an upper hand in this case.

Their vast knowledge and expertise in multiple domains give them an edge over others to explore careers like data science/analytics and big data engineering.

Here we have listed out some of the top IT giants in India and how much mean stack developers can make in these companies [ambitionbox.com] – 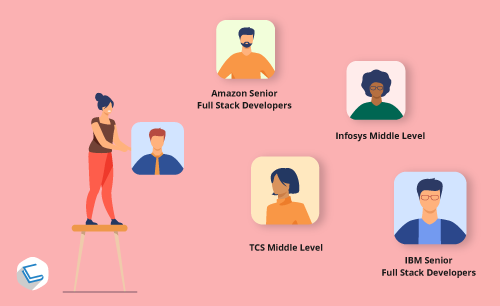 As mentioned earlier, your skills and level of experience as a developer can speak volumes about you. But another important asset to a mean stack professional’s profile is the ability to stay abreast with the latest technology.

Thus, qualification is the key here. A relevant certification or a degree that can add value to a mean stack developer’s profile is a must take for everyone who wants to grow in the field.  Crampete’s online course on full-stack and mean stack development is one such certification that you can opt for, if you are willing to upgrade yourself as a developer. Certifications make you more qualified and fit for a job; besides they also open up ways for you to increase your income.

Countries like France, Italy, Norway, and the USA provide a lot of scope for developers to grow in their field and earn more. In the USA, for example, on average, means stack developers can earn minimum $4000 per month.

Now that you are aware of the salary of a mean stack developer in India, why don’t you get ahead and take a certification course in mean stack/full-stack development? The course will help you pick a suitable career as a developer in various domains. It could also prove to be useful if you are looking forward to work in any countries abroad as a web developer or full-stack developer. Opportunities are enormous; you must decide when you want to begin exploring them.

1. Is Mean stack in demand?

On the other hand, the MEAN stack is relatively new to the market, and because to the surge in its popularity over the last 5 years, they are willing to pay as much as 4–7lpa to freshers with the correct skill set, which is already 2–3 times higher than the salary provided in Java.

3. What type of coders make the most money?

The ability to work with the computer framework Spark and the programming language Scala earns the highest earnings in the United States, with an average salary of $125,000. At $115,000, the database management system Cassandra, the computer language F#, and the open-source framework Hadoop were all among the highest-paying technologies.

Angular Full Stack is a project that allows you to quickly learn how to use the latest version of Angular with a real backend and database. From frontend to backend, the entire stack is written in TypeScript, providing you the advantage of writing code in a single language across the board.