MongoDB vs. MySQL: What's the difference?

Two of the most popular and competitive database providers for web applications are MySQL and MongoDB. Both are database management systems (DBMS) that let you gather information from a website or application and produce reports, but they have different designs. MongoDB is a document-based system, whereas MySQL is an antiquated table-structured system.

For storing large amounts of data, MongoDB is a document-oriented NoSQL database. A database called MongoDB first became popular in the middle of the 2000s. It fits the definition of a nosql database.

Because this form of DBMS employs dynamic schemas, records may be created without beforehand specifying the structure, including the fields, types, and values.

By adding new fields or removing existing ones, MongoDB enables you to modify the structure of records, or documents as we refer to them.

A well-known and commonly used DBMS system is MySQL. The name was inspired by the daughter of co-founder Michael Widenius with the first name My. Under the terms of the GNU GPL, MYSQL's source code is accessible. Oracle Corporation owns and manages the project.

Since it largely uses the relational database paradigm, it is an RDBMS (Relational Database Management System). Database management is facilitated, and it is more versatile.

You must pre-define your MySQL database structure in accordance with your needs and establish rules to guide the relationships between the columns in your tables. 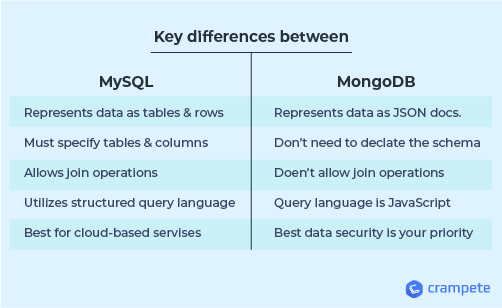 MongoDB: Why Use It?

The major justifications for utilizing MongoDB are as follows:

MySQL: Why use it?

Here are a few significant justifications for choosing MySQL:

Differences(Comparison) between MySQL and MongoDB

The following are key distinctions between mongodb and MySQL: 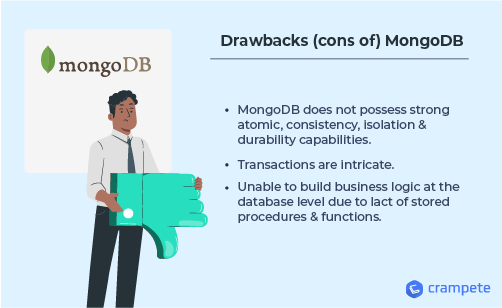 When to use MongoDB?

When to use MySQL? 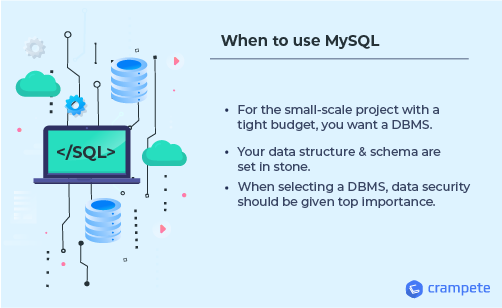 Which Should I Pick?

Real-time analytics, content management, IoT, mobile, and other application types are all good fits for MongoDB. If you have organized or unstructured data with room for quick expansion, this is the best option.

Because of its adaptability, performance, dependable data protection, and simplicity in data administration, MySQL is highly organized. Your performance problem may be solved, interaction made easier, and robustness ensured with proper data indexing.

However, you should use MongoDB if your data is unstructured and difficult to manage, or if pre-defining your schema is difficult for you. Additionally, MongoDB will be a big assistance if you need to manage a lot of data and store it as documents.