A full-stack developer is one of the most sought-after jobs in the world. Companies in the sophisticated technology industry, in particular, are looking for these specialists in huge numbers. They are in charge of numerous front-end and back-end duties for the development of various online apps. The average full stack developer salary in the US is $100,351 per year, despite the fact that it is a tough and rewarding career.

What is the definition of a full-stack developer?

A full stack web development is knowledgeable in a variety of computer languages and can create a website from scratch. These individuals are capable of working with code that deals with all areas of the user experience (frontend) supplied by a computer applications system. They're also capable of coping with the code that drives the logic in these software systems (backend).

full stack web developer connect the front end and back-end of computer and web-based application systems. They apply their expertise and abilities to guarantee that the web application functions as intended by bridging the gap between client side and server side software. Companies rely on these individuals' knowledge to spot problems in both the front end and back ends, as well as to tackle overlapping difficulties in both disciplines.

Given their expertise, full-stack engineers may smoothly migrate from one development environment to another. They don't just want to know that things are operating; they want to understand how and why each feature works. Their inexhaustible abilities support the comparatively high full stack developer salary in the US.

Full Stack Developer salary in the US per month – 2022 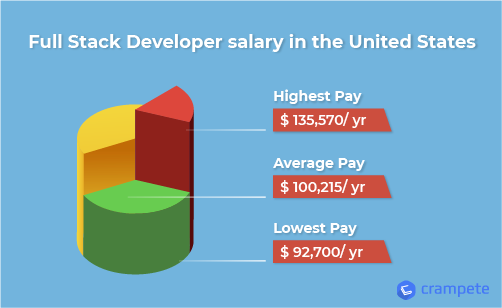 As per Google, full stack web developer are in high demand in the United States and also in India, with firms prepared to pay an average income ranging $100,215 per year. The average full stack web developer salary in the US is $8,153.16 per month, or $55.57 per hour. The lowest wage for newcomers to the area is $92,700 per year, with the highest remuneration going to $135,570 per year for the most experienced experts in the sector.

However, full-stack developers' salary in the US is determined by a number of factors. These include the city and firm where they work, as well as their degree of experience, credentials, and certifications. Furthermore, the salaries stated do not include bonuses, stock options, or other forms of remuneration provided by employers.

In the United States, the annual full stack web developer compensation rises dramatically with time and expertise. Salary levels differ from one location to the next, as well as from one industry to the next. Furthermore, compared to established organizations, small and medium-sized businesses and startups provide lesser pay.

Based on these factors, the following tables give complete information on the average wage of full-stack developers in the United States.

Full stack developer salary in US for freshers / Entry - level

Full stack developer salary in US for Experienced

What Does It Take to Become a Full Stack Developer?

Many young people pick this career path because they may make a better full stack developer salary in the United States as a fresher or junior. However, ambitious applicants must first complete an extensive curriculum that covers many parts of computer science basics as well as front and backend software development.

These experts must be able to operate in a variety of situations and use their basic expertise in novel and varied ways. These people do not need to be experts in all parts of web development, but they should have extensive knowledge in each. As a result, the full stack developer compensation in California and other US states is mostly determined by the applicants' talents and knowledge.

Read More: How to become a full stack developer

The word "front end developer" is a relatively recent term that has mostly supplanted the term "web designer." All interactions between users and a computer or web application system are coded by these individuals. While front-end programming used to be exclusively focused on markup languages, it now necessitates a good degree of programming knowledge and expertise. This is one of the reasons why full stack developers in Texas earn more money if they know how to write in JavaScript. Front-end developers in the US earn an average of $100,055.

Back end developers code the logical back end of computer and web-based application systems. The computational logic underlying software, websites, and information systems is coded by these people. Backend programmers earn a higher full-stack developer compensation in Florida since their work is more technical and demanding. With their talents, these professionals make an average income of $102,113 in the United States. 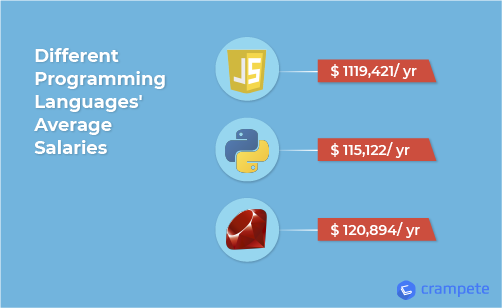 Full-stack engineers must have excellent programming abilities, which influence their pay significantly. The more languages someone can program in, the higher their chances of getting a good job. It's also not unexpected that developers who know the most recent languages earn more than those who know the older ones. As a result, the compensation of a MERN full stack developer salary in the United States is likely to be greater than that of a python or.Net engineer or reactjs. The following table shows the typical wages for full-stack engineers who work with a variety of popular languages.

Career as a Full-Stack Developer in the US

full stack developer have unrivaled growth in the global market due to their broad knowledge and skills. As a technology center, the United States has the highest concentration of full-stack developers, which is expected to continue to expand. According to the US Bureau of Labor Statistics, job prospects in the full-stack development industry are expected to increase from 135,000 to more than 853,000 by 2024, enabling a larger market for emerging developers to begin their full-stack journey.

While the total software development profession in the US is expected to grow at a healthy rate, full-stack developers are likely to gain more from their valuable ability and knowledge.

A full-stack developer's job is incredibly exciting and lucrative, and there is a lot of room for advancement if you keep learning new things and improving your skills.https://crampete-staticfiles.s3.ap-south-1.amazonaws.com/images/blog/full-stack-developer-salary-in-the-united-states.png