Do you want to know how much a Python developer salary in India?

Python has been sweeping the programming world throughout the previous decade, and its popularity grows with each passing year. Surprisingly, the language has been around for three decades and has even exceeded 'conventional languages' like Java, C#, and PHP. Because of its versatility, it has become one of the most in-demand technologies worldwide. As a result, the Python developer salary in India is much more than that of individuals working with traditional web-development languages, as noted above. A data science certification from a reputable institute can boost your compensation.

What Exactly is a Python Developer and What Do They Do?

Python developer salaries in India have skyrocketed since data scientist entered the scene. As a result, the demand for Python developers is increasing in tandem with their pay.

If you want to be a successful python Developer in India, you must constantly improve your abilities, learn new things, and upskill. Here are some of the most important talents to have if you want to work in Python. 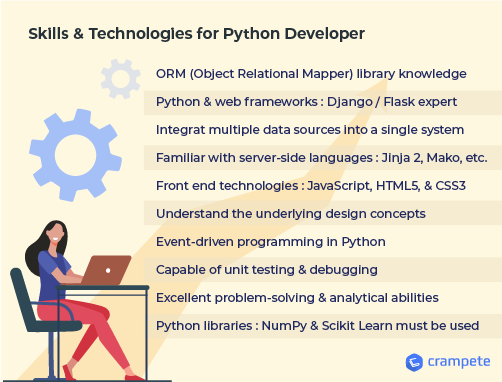 Read More: How to become become a python developer

In 2023, Python is expected to be one of the most commonly used programming languages. The number of employment opportunities and organizations employing these functions grows in tandem with the increase in share and popularity. To enter the extremely competitive world, you must first understand the many employment opportunities that are offered. A brief description of each position is provided below.

A Python web developer should be knowledgeable in web frameworks, HTML, and CSS. These are the prerequisites for web development. He or she must write server-side web logic. A good understanding of databases is a plus. Knowing libraries like Tkinter is advantageous when developing GUI-based web apps.

Data Analysts must do data interpretation and analysis on a regular basis. Knowing Mathematics and Statistics is an important aspect of being a Data Analyst. Python libraries used for data visualization and manipulation include NumPy, Pandas, Matpotlib, and others; understanding this may be incredibly valuable to a Data Analyst.

Knowledge of data analysis, data interpretation, data manipulation, mathematics, and statistics may help you make better judgments. As the work concentrates around development, he or she must be well-versed in libraries such as Tensorflow and Scikit Learn. Machine Learning methods such as Naive Bayes, regression analysis, and so on are also required.

Read More: How to become a data scientist

A Machine Learning Engineer must grasp deep learning ideas, neural network design, and machine learning algorithms, as well as mathematics and statistics. A Machine Learning Engineer should also be familiar with gradient descent, regression analysis, and prediction models. Machine learning engineers go beyond programming by channeling creativity and implementing it in applications.

An AI Engineer must have programming abilities, understanding of data science ideas, and data modeling techniques. He or she is supposed to program computers in the same way as a human mind might through cognitive simulation. Common tasks include reasoning, knowledge representation, and natural language processing (NLP).

Salary of a Python Developer in India

For every working professional, money is one of the most important elements in deciding on a position. A python developer salary is determined on their level of experience. The higher a developer's compensation, the more experience they have. When it comes to the compensation of a Python Developer, there are various additional factors to consider. So, for the time being, let's look at the average wage and pay trends in India.

According to PayScale, the average starting income for a Python Developer salary in India is Rs. 412,200 for a fresher. It equates to about Rs. 30,600 per month. The pay might be as high as Rs. 1,000,000 per year. On the other hand, depending on abilities, experience, and employment location, the minimum annual compensation might be approximately Rs. 205,006.

The most often sought aspect is the Python Developer Salary in India. It is reasonable to state that a Python Developer's wage structure and job progression are inextricably linked. Python job salaries in India are mostly driven by the four elements listed below:

Assume you are a beginner Python developer in India. Your annual pay would be around Rs. 415,273.

You advance in your career as you obtain more experience and talents. You are now a Python Developer at the Mid-Level. Your average pay after the promotion would be Rs. 900,800.

Consider yourself a few years in the future. You are now an experienced and senior Python Developer. So your new compensation would be around Rs. 1,140,000.

In Indian cities, technology has been on the increase in recent years. Python Developer Jobs are available all around the country, particularly in-

It's worth noting that knowing one programming language qualifies you for a variety of professions in the IT industry. 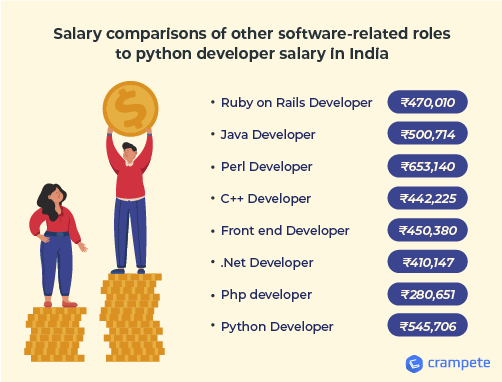 Why should I learn Python?

You now see why Python has grown by leaps and bounds, effectively infiltrating every sector! As a result, the need for Python Developers in India is increasing. Learning Python and becoming a Python Developer will earn you an incredible wage, whether you are interested in web development with Django or data science with NumPy or Pandas.

So, whether you're a newbie or someone caught in a rut, python is the key to unlocking new doors. Hope, Python developer salary in India would have enlightened you much more on the topic.